Pichwai : The Folk Art of Nathdwara 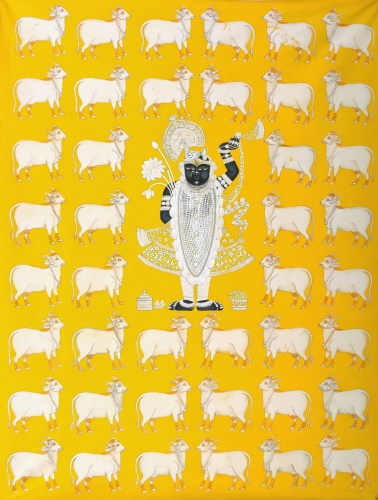 The indigenous art and culture of India are recognized worldwide. Indian Subcontinent has a countless number of Folk Arts and Crafts. One such Art is the captivating art of Nathdwara Rajasthan, called Pichwai. Nathdwara is a holy town in the Udaipur district of the Indian state of Rajasthan. Recognized internationally, Nathdwara has devotees from across the globe. Pichwai catches the devotees' eyes instantly.

Beginning of Pichwai
The cloth that is used as the backdrop for Shrinathji in his shrine is painted to give the wholesome effect to the surroundings. Shrinathji's figurines are drawn with other important elements that were the part of his life like cows and the likes. This is how Pichwai was born in Nathdwara. This 400 years old visually stunning art form majorly depicts the life tales of Shrinathji, the Child Avatar of Lord Krishna, each story uniquely suited to a particular season or festival Pichwai Explained
Pichwai is created to depict the story of Shrinathji, another form of Lord Krishna holding the Govardhan hill. There is a beguiling history attached to the story. The dwellers of Vrindavan faced Lord Indra's (Lord of heaven) anger in the form of heavy thunderstorms and rains. Henceforth Lord Krishna came to the rescue. He lifted the Govardhan Hill also called Govardhan Parvat on his little finger.  Lord Krishna lifted the hill named Govardhan on his little finger and all the people of Vrindavan took sanctuary under the hill. Thereafter Lord Indra realized his mistake and stopped the tribulation. People since that time have been worshiping Govardhan Hill.

A typical Pichwai has 24 boxes around called Swaroops. Each of them has a Krishna, Gopis and various other elements. The elaborate Shringar of Shrinathji is captivating. There is so much that happens in Pichwai and yet it doesn't feel crowded. Despite having various figurines and elements in it Pichwai is a sheer example of Aesthetic balance and beauty. The colors and the vibrancy of the Pichwai are its USPS. The touch of vibrant natural colors on the fabric or paper give out a certain kind of romance that speaks for itself. Process of Making a Pichwai
Considering the details and the enormity of Pichwai, we can easily make out that it takes a loadsa time to be what it is. The making of a traditional Pichwai consumes a couple of weeks that can even stretch to months. Originally Pichwai was painted on the handspun starched cotton fabric. The artisans would then sketch the art on that starched cloth. Then the decorative and beautiful images were created. The images were then ready to be painted with completely organic and natural colors, paints and even natural brushes. These colors were obtained from coals indigo, gold, silver saffron, zinc, and other natural sources. in brilliant colors or woven with hand blocks. The bright and intense colors like yellow, green, black, red dominate the Pichwai. The ornate part would get the pure Gold as color. The borders are enhanced with crystals and other decorative elements.
Shreenathji's image is given special features like a big nose, large eyes, and fat belly. The distinct features and expressions of the diety's face radiate the pleasant and divine feelings. Pichwai Now
We are nothing without our heritage. The 17th-century painting style had lost its prominence but now again has gained the momentum and is undergoing renaissance with the concerted efforts of various artists and foundations who aim to revive and revitalize this rare craft. To make Pichwai prominent for today, the artist has contemporized the artform without compromising its traditional touch. Pichwais traditionally was expansive as they were hung behind the deity but as time passed by the size of the paintings started reducing. Also, the colors are no longer pure organic. Due to the budget and time constraints and the unavailability of natural dyes, artists now use either synthetic or the mixture of synthetic and natural colors. Also, the paper is used as an alternative instead of cotton fabric. A Pichwai now belongs everywhere. Because of their beauty and brilliance, Pichwais are now also hung on house walls and other places and are no longer restricted to the temples. Hence, the artists are now making paintings of smaller proportions, which are apt for the smaller homes of today.