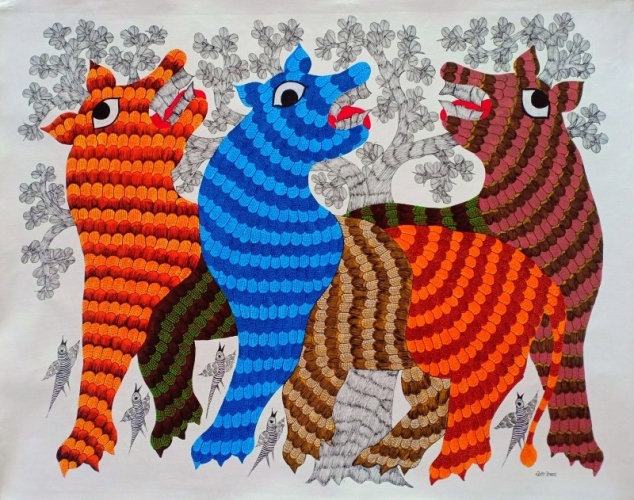 India has its own identity of rich cultural diversity and is well reflected in the charm of its enchanting folk arts and crafts. Marvellous painting styles are prevalent across various regions, representing the tradition, customs, and beliefs expressed from one generation to another. Most of the Indian painting styles existed as cloth paintings, wall paintings, or murals and with the passing of time; urban sprawl transformed these art forms on canvas, paper, etc. Indian painting styles are not just a contemplation of the primeval lifestyle but a perfect example of artistic expression through simple yet distinct compositions. Below are some of the most popular Indian folk painting styles. Madhubani paintings are the most celebrated style of folk painting from India; it is a form of wall art that arises in the Mithila region of Bihar. This eye-catching art style never fails to amaze one by its beautiful illustrations on the exposed interior walls of the houses in Bihar. Madhubani paintings are a perfect example of artistic expression and evocative portrayal of culture and traditions. The designs make perfectly distinctive geometrical patterns, scenes from mythology, and symbolic images. The perfect blend of bright vibrant colours and unique patterns make Madhubani stand out from other painting styles. Katchni, Tantrik, Bharni, Khobar, and Godna are five different styles of Madhubani paintings. Lalita Devi and Bua Devi are National Award winning artists for Madhubani artworks from India. Warli is a 2500-year-old traditional painting style from Maharashtra majorly practiced in Thane and Nashik region. Warli paintings illustrate the nature and social rituals of the tribe. Warli paintings also showcase day-to-day life scenarios of the local people of that particular community just like dancing, farming, hunting, praying, etc. The local women used twigs to draw such beautiful lively designs with rice paste on mud walls to convey the celebration vibes of harvests or weddings. Jivya Soma Mashe is a
Padma shri honoured artist for her traditional tribal artwork from India. The Kalighat painting was discovered around the mid-19th century at Kali Temple in Calcutta. These paintings and drawings were done on paper by a community known as "patuas". A Kalighat painting depicts scenes of everyday life and mythological deities in a captivating manner. Kalighat artists use subtle earthy Indian colours like indigo, ochre, Indian red, grey, blue and white. Anwar Chitrakar is a National Award winner recipient for Kalighat artworks from India. Phad is a traditional Rajasthani scroll painting from India, depicting the stories of local deities, heroic figures from battlefields, adventure stories, and legendary romantic stories on horizontal cloth scrolls with the hues of red, yellow, and bright orange. Phad Painting marvellously portrays multiple stories in a single composition and beautifully maintains the aesthetics of artistic expression. Shri. Shantilal Joshi is a National award winning artist for establishing this impeccable Phad paintings and artworks. Gond paintings are a series of arranged dots and dashes developed by the Gondi tribe of central India. The tribes used to recreate some famous epic mythological tales of histories to traditional songs and rituals with rich detailing and bright colours. Traditionally, the colours used for gond paintings were derived from natural resources like cow dung, plant sap, charcoal, coloured soil, mud, flowers, leaves, etc. With growing times, the Gond art has moved beyond being a tribal art style. Bhajju Shyam is a National award winning artist from Madhya Pradesh for this Gond style artwork. Kerala mural paintings are the most unique art form and have deep spiritual roots depicting themes of Hindu mythologies, epics of the bye-gone era, classic tales of Krishna, and mystic forms of Shiva and Shakti. These traditional art styles are made up of bold strokes, and vivid colours. White, ochre-red, bluish-green, yellow-ochre, and pure colours are predominantly used in Kerala mural painting. Achutan Ramchandran Nair was honoured with Padma Bhushan for his outstanding Mural artwork contribution towards the art world. Patachitra is a traditional art form from Odisha. Patachitra paintings are mostly derived from mythological and religious themes done beautifully with bold, strong outlines, vibrant colors like white, red yellow, and black with decorative borders.  This artwork is admired by art lovers across the world and Sharat Kumar Sahu is an National Award winning Patachitra artist who traced this traditional artform internationally.