Kalighat Paintings The Folk Art of East of India 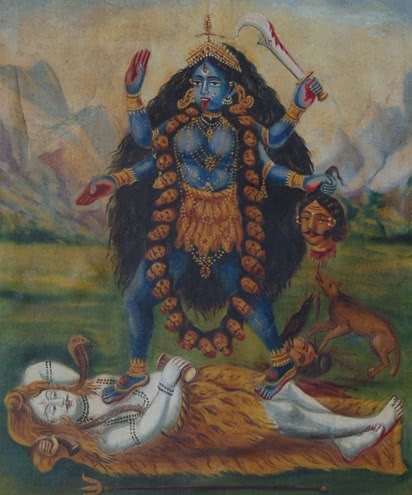 The East of India, is still the most coherent place in the coutry when it comes to valuing art and literature. And one among the many cultutral variations that the state of West Bengal has (like Sculpting in Kumhartuli, or the School of Arts in Shantiniketan and many more), one of them is the Pianting style called the Kalighat Paintings, a 19th century art. Said to have originated from the Kalighat area of Kolkata, earlier it portrayed Goddess Kali and her tales of defeating the demons. Later, the paintings evolved to the depiction of various other Gods and Goddesses and their tales. And much later the paintings went onto depict the daily life of the people living in the space, but the style of the painting remains the same. Pattachitra, the art practiced by the Patua communities, a special mention can be seen of Kalighat paintings on their scrolls.

Kalighat Paintings were first painted on the mill-made paper and using the natural and homemade dyes. During its manifestation, in the earlier days, it was a community effort. The family members or the community members, would sit together and ground the ingredients to make the dyes, colors and some would draw the outlines of the main figures in the painting and while others would work on the backdrop.

Kalighat Paintings made by the Community

The distinct feature of these paintings are the big eyes of the main figures and the colors used are prominently the primary colors like yellow, blue, green,etc.

As the paintings evolved and got influenced during the reign of British Empire, it gained varieties, and prominently two kinds of Kalighat Paintings started to exist:

1. Oriental- Oriental Kalighat Paintings depict the Gods and Goddesses and their stories. These include Ram and Sita, Krishna and Radha, Lakshmi, Durga, Shiv-Parvati and many more.

2. Occidental- Occidental Kalighat paintings depict the day-to-day chores and lives of people, the stories of the warriors and fighters during the Independence like that of Rani Lakshmi Bai. This made the Kalighat Paintings the first of its kind and the art form gained a lot of positive criticism from the people and other artists, and was a compelling art for all the sectors of society, as it reached everyone, physically and through its thoughts.