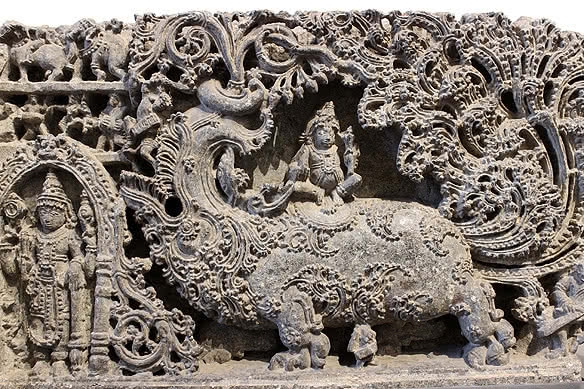 Sculptures were the first kind of "Artform" that came into existence. Since the humans started to settle, they decided to make houses and those beautiful mud abodes, were nothing less than sculptures. Later the art evolved, when the abodes became more form oriented, and making of bricks gave form to the homes that came to be. This can be seen in the spaces and designs of Harrappan Civilization. Later, sculptures became the means of depicting the culture and lifestyle of a place, and much later it became one of the most loved form of Art and homes started to become embellished by it.

India has had fair number of Sculptural marvels, and have their significance in depicting the Indian Culture.

Some of the famous Sculptures from the Indian/Subcontinental Indian Culture are:

The statue of the famous 'Dancing Girl, found to be in the times of Harappa. The statue, in bronze, is 10.5 centimetres (4.1 in) tall, and depicts a naked young woman or girl with stylized proportions standing in a confident, naturalistic pose. Dancing Girl is well-regarded as a work of art, and is a cultural artefact of the Indus Valley Civilisation.

The statue is regarded as one of the oldest and magnificent artwork till date. It is utterly significant to decipher the origin of the First Civilization and the settlements in the Indian Subcontinent. The most celebrated capital (the four-lion one at Sarnath (Uttar Pradesh)) erected by Emperor Ashoka circa 250 BC. also called the "Ashoka Column" . Four lions are seated back to back. At present the Column remains in the same place whereas the Lion Capital is at the Sarnath Museum. This Lion Capital of Ashoka from Sarnath has been adopted as the National Emblem of India and the wheel "Ashoka Chakra" from its base was placed onto the centre of the flag of India. Sculpture of Gautama Buddha delivering his first sermon in the deer park at Sarnath. He preached the Four Noble Truths, the middle path and the Eightfold Path. In the statue, he is seated in Padmasana with his right hand turning the Dharmachakra, resting on a Triratna symbol, flanked on either side by a deer. The famous Shiva Dance- Nataraja and the bronze sculpture, of the Natatraj of the Chola period is one of the most significant religious sculptures, and beholding the stature even today. Made with the Lost wax technique, the Chola bronzes bring together the art of metallurgy and the aesthetics of the sacred and the sensous dance come out in a remarkable fashion.

Sculpting as an art has evolved to so much greater extent since the pre-historic times, and today a lot of variations can be seen in this, in terms of materials, aesthetic, and even themes. The sculptors are more profound these days and that can be seen in the installations today.