Cheriyals of Telangana : Pictorial Narratives of the Local Myths 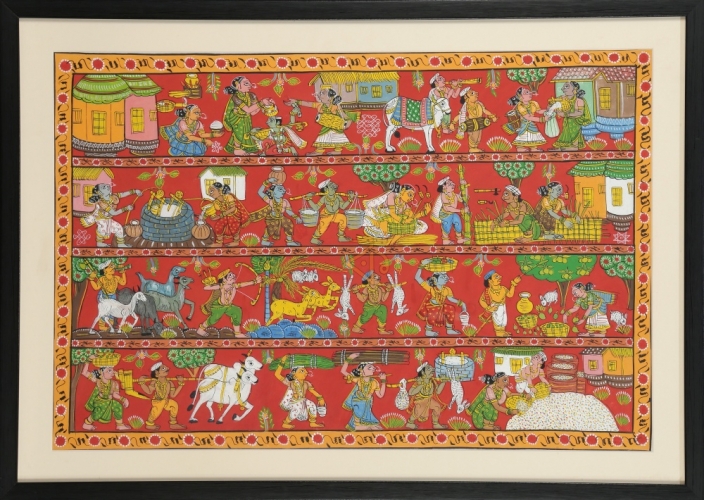 India's rich heritage has been fascinating the people around the globe since ages. Ancient painting styles of India are celebrated worldwide. One such painting style is Cheriyal Scroll painting. Cheriyal is a small village in Telangana. Hence one  can easily make out that this painting style find its roots here. Cheriyal paintings were arguably brought to India by the Mughals in the 16th century. However many claim its roots to go back to the 5th century in India itself. We can find a lot of influence of Kalamkari and Deccani scroll paintings in Cheriyal paintings. The resemblance of even the 12th century Kakatiya paintings can be witnessed in the Cheriyals especially in the Pillalamarri temple of Mahbubnagar, Telangana and the hill temple of Tripurantaka. Temple art traditions have a high influence on Cheriyal Paintings.

WHAT IS CHERIYAL PAINTING?
Cheriyal paintings are generally the pictorial presentation of scenes from Indian mythological epics such as Ramayana, Mahabharata, Garuda Purana, Krishna Leela, Markandeya Purana and other mythological scripts. Cheriyal paintings are very similar to other folk paintings say Pattachitra, Phad painting, and the likes as they also act as a visual aid for storytelling. They are made on a long vertical piece of cloth in a narrative form. Traditional folk singers would narrate the stories using cheriyal as a tool for visual presentation. They would also use harmonium, tabla, and other instruments to bring about tune and music in their narratives. Cheriyals carry the rich cultural history and heritage with them. These small but wealthy stories were also used to educate the uneducated. They acted as a wonderful means of communication and conveyed significant moral virtues. Various panels are separated by architectural bodies and their caste lineage which is a very important aspect of cheriyal painting. Cheriyals have mythical narratives. There is also a ritual that is performed if a scroll outlasts 100 years. It is immersed in the holy river. The size of paintings varies from 1 foot to 60 feet depending upon the number of characters depicted in the story on the painting. In the past, the scrolls were the backdrop to the oral traditions of common people. Each community had its peculiarities and its favorite heroes and heroines and also a selection of stories from the local myths. One cast could only narrate for specific other castes. For example, the Bhavnarushis and Markandeya Puranas were performed for the Padmashalis by the Kunapuli subcaste. It was kind of an interactive thing. It was not only the entertainment but also the rituals, usually performed for over three nights in a row but would stretch uptill 20 days. The presence of such storytelling performers goes back to as early as 10th-century Telugu literature. What is different about Cheriyal paintings is that they have all the community-specific stories. Besides, the mythical narratives they also focus on the day to day lives of simple communities like fishermen, food gatherers, cobblers, etc. We can also see Cheriyals as the stylized version of Nakkashi art rich in local motifs peculiar to the Telangana region.

Besides paintings, Cheriyal artists also used to make masks and dolls. These dolls and masks were also an integral part of the storytelling traditions. As far as their making is concerned, the masks were made of coconut shells( smaller masks) and the sawdust and tamarind seed paste (larger masks). Whereas, a light wood called tellapuniki along with sawdust and tamarind seed paste was used to make the dolls. PROCDURE
The procedure of making the Cheriyal paintings was all organic in ancient times. Be it brush, canvas/cloth or the paints, all were made from the natural sources.
Here is how Cheriyal paintings were made.
-First, the Khadi cotton cloth was coated with a thick paste prepared by boiled rice starch, white clay, gum, boiled tamarinds seed paste. This process would take a couple of days.
-Once the cloth got ready, the figures and other elements like architectural features, landscapes, animals, forests, birds, rituals were drawn on the cloth.
-Sharp outlines were then made directly by the brush to define the drawings.
-Lastly, the colors were filled in the paintings. Now, the colors used in the figures had a certain meaning and symbolism attached. The background was painted in red color to highlight the figures in the paintings. The face and skin were painted as blue and yellow denoting the gods and goddesses respectively. Brown and darker shades were used to represent demons and pink skin tones were used for humans. All these colors were naturally obtained. Natural color stones were finely crushed and water was added and mixed well to make it a thick paste. White was obtained from white seashells, black form lamp  yellow from turmeric, blue from indigo and other colors from various vegetable dyes and ground stones. Later, tree gum water was added to preserve them and make them a sticky paint
-Once the painting was completed, leaves and flowers were made in the borders. TAKING THE LEGACY FORWARD
The advent of TV and cinema and now the OTT platforms has faded the practice of scroll paintings. Now, Cheriyal is the only place where this craft still survives. In the present day, D. Vaikuntam, D.Nageshar, D.Venkataramana, and D.Pavan Kumar along with their families are taking the legacy forward. Having learned the Cheriyal techniques from their father, Dhanalokota Vaikuntam along with his elder brother Chandriah started practicing Cheriyal at the age of 12. All of them are fully devoted to revitalize and preserve the art form. Having numerous accolades on his name,  Vaikuntam along with his wife Vanaja and children Vinay, Rakesh and Sarika actively practice the art form. CHERIYAL ART TODAY
With changing times, the artform has also seen various changes. Nowadays, the long mythological stories have been cut short as there are no traditional patrons for long scrolls and the whole picture has narrowed down to an event. Instead of depicting the whole story, only solo events, or episodes or characters of traditional stories are now depicted on the paintings. Considering the size of houses that have trimmed down, the size of paintings have also become short. The walls of the houses now do not have enough space to accommodate 60 feet long scrolls which is why the cheriyal paintings also now usually go up to 2-3 feet in length. Also, the colors are now not prepared traditionally. Synthetic watercolors which are also pocket friendly have replaced natural dyes. However, this ancient art form has managed to survive and is inspiring people worldwide. Considering its cultural values and rich heritage, the Intellectual Property Rights Protection and Geographical Indication (GI) status were given to Cheriyal scroll painting in 2007.