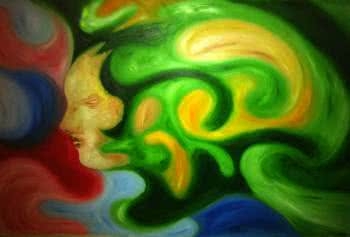 An artist, a think and a script writer, Tanuj Bhramar is a young artist on the verge of making a splash in the Indian Art Scene.

Here is out interview with this budding artist.

What inspired you to become an artist?

Nothing specific actually, I was pretty much entrenched in the arts since childhood. I used to read a lot of comic books, watch a lot of movies, play a lot of video games. The people who crafted these experiences fascinated me, somewhere in my tiny mind I wanted to be those people. I didn't realize that till I went to the States. It all finally came together to inspire me to become an artist.

What do you like the most about being an artist?

Apart from being my own boss, everything. I like to tinker with everything, while painting I try to discover or rediscover myself. Painting gives me time to think about myself and the decisions I have made till now. It helps me realize who I am and in turn makes me understand the world I inhibit.

People seldom get alone time to sit and ponder about themselves. Being an artist gives me that time. I think that is the thing I like about being an artist the most.

Tell us about your work?

Right now I am working on a series that focuses on duality. I am trying to capture duality by painting people from myths and legends, who I think represent duality. For example I just did a painting on Plato and his allegory of the cave. Based on the fact that in the cave depicted by Plato everything is an imitation of the original. So the man trapped in the cave has to leave it to actually find his true self, as he himself is an imitation.

My previous exhibition that was held at the Jahangir art gallery was based on emotions. I am also writing a film script, which I plan to direct next year.

When did you start painting and how did you learn to paint?

I started copying comic book characters when I was 8. I never really learned how to paint till I joined The Doon School. It was there that I was introduced to oil colors and acrylics. I gravitated more towards oil, as it seems more inviting and natural. I tend to follow my gut feelings a lot and the only reason that I started painting in oil is because it felt right.

After school I didn't paint for a long time. I was more focused on movies and video game development. I went to Columbia College Hollywood (offshoot of Columbia University) and got my Degree in BFA Film Direction. During that time I worked with IGN Entertainment, the company reviews video games. Then I interned in Family Guy and later I was set coordinator on the Big Bang Theory for 6 months.

During my final 2 years at college my friends and me formed a company called Forstora Media. We were an independent company, which shot promo videos for DJs. I have worked with Djs like Flux Pavillion, Cookie Monsta, Funtcase, Borgore, and Swedish House Mafia.

Unfortunately after 4 years I thought it was time to come back home so I left everything and I came back. I just followed my gut feeling. Once I got back I started painting again and settled down in Mumbai. I try to implement what I have learned from films and other forms of media in shaping my art. It would be right to state that I learned to paint through other mediums. My art is still developing and I am happy that I am still growing as an artist.

What has been your biggest source of inspiration? What's your favorite subject to paint?

The sense of wonder I think. I am fascinated by everything the world has to offer culturally and naturally. It never ceases to amaze me. It may be a DJ making music or 4 people somehow riding a bike together. I love the way things operate and through my art I try to capture that. I am still pretty much a kid and through those kid's eyes I try to see the world. I try not to stick to definite subjects. I believe if I get stuck to painting one thing only I will not grow as much as I want to. I try to paint landscapes, portraits even animals, anything that fascinates me.

What was the best advice given to you as an artist?

Art is subjective. One should be open to criticism, afterwards it depends on you to incorporate it in your work or not. One should make what he or she wants because the paintings you make are a part of you. During a college lecture with Nicolas Winding Refn director of Drive, Valhalla Rising and other trippy movies, he stated that what may be liked by others may be disliked by an equal amount of people.

What matters is that you are happy at the end of the day. If you are happy pleasing just one person with your artwork your job is done.

If you could live and paint at one place/city in the world for your entire life, where would that be?

Istanbul. It is a fascinating city. The blend of European and middle eastern culture had led to some really beautiful architecture and tasty food. Istanbul's amalgamation of culture, religion and people makes it so rich and interesting. As a filmmaker and painter I find it full of unique sites and sounds that never ceases to ignite the creative spark.

How do you keep yourself busy, when you are not painting?

I listen to music, read a lot of books, watch a lot of movies and play a lot of video games. All this helps me as I try to find the common thread between them all. Art by nature is incestuous and I don't say it in a bad way. Art inspires other art, it is a never ending cycle. By watching movies, playing games, reading books and comics I keep the cycle going.

What role did your family/friends play in your becoming an artist?

A major role actually. Both my parents are IAS officers in the Jharkhand government. They never pressured me into following a fixed path. They encouraged me to find my own way. Without there encouragement I would not have been where I am. The friends I made in The Doon School have always been there for me.

They have always kept me grounded and never fail to give me frank opinions about where I am headed. I do consider myself fortunate that I was able to find friends like that and was born in a family that supported me all the way.

What the most critical problem you face as an artist?

Change. In this day and age one has to change so rapidly to stay relevant. As an artist the trick is to find your style yet show it in different ways. To look at the world through your lens. Changing art forms and styles are something, which I welcome, as it keeps me on my toes and encourages me to push my self further. The constant want for something new and exciting along with changing art market can be really demanding on an artist.

This can also be difficult as constant change can drain an artist artistically and mentally. It's a mixed bag actually; artists who have been relevant to this day and age are the ones who were able to adapt themselves to the world around them, through constantly evolving and changing. Maybe that's the true test of being an artist.

What can we expect to see from you in the future?

I am trying to expand my art beyond the canvas. Apart from working towards making a film I also plan to design an instillation more on the lines of interactive public art. I am presently working towards an exhibition I would be having in September in Delhi. Along with that I am also writing a script for a movie.