Delhi-based artist. Did  BFA from College of art, Lucknow followed by MFA from J M I, New Delhi.

Curated  the group show “THE CONFLUENCE” of 14 artists from different states at Rabindra Bhawan, New Delhi in Dec, 2011.

and many more add another significant count to his artist profile.

His enormous range of art collections is in India and abroad.

He  has also played a significant judging role as he has been there as a Jury Member of National and State Level Scholarships, member of Interview Board (appointments) and also as an examiner in various institutions for higher education.

Anand Narain is the explorer of untouched nature. He creates which is undone yet. His creative soul travels through real world and finally reaches out his own magic planet to come out with his original ideas which is very close to reality but in abstract symbolic form. His deft use of the brush and sober color application brings a unique richness in his works.

Apart from painting, his writeups and poems have also been published from time to time in various papers and magazines.

He lives and works in New Delhi, India. 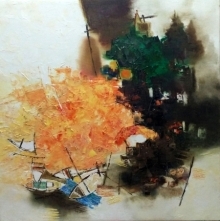 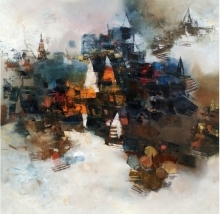 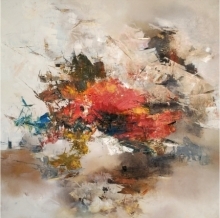