My works are a reflection of all that surrounds me. My affinity towards portraitures has developed since my college days where I had received the training for classical portrait making. My style of paintings draws reference from the classical style of portraiture where the portraits along with a background complete a visual narrative. My earnest try is to create that level of visual expression, where the faces complete with multiple floating imageries and distortions create a narrative.

acrylic on Engraved Board 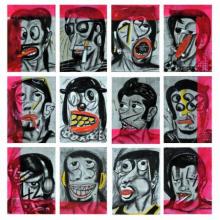 acrylic on Carbon Felt Board

Kneel Down Or I Cry