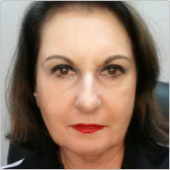 I am an Abstract Expressionist Artist taking on an understanding of a visual communication between human emotional energy and spirituality of nature.. These works relate to the world globally to create an aesthetic balance between land and water.

Romaine Kaufman was born in South Africa and lived her formative years in Perth, Western Australia. Following her training in Fine Art and Design at the West Australian Institute of Technology (now Curtain University) she came to the United States to enter the French Fashion
Academy in New York, where she studied for several years.

Romaine has travelled extensively throughout Asia studying textile design. During her college studies, Romaine had her first solo show of drawings and paintings at age eighteen. The Lord Mayor of Perth, Sir Thomas Wardle opened the exhibition and bought one of her canvasses for his offices at Council House.

Romaine has taken on Abstract Expressionism to convey an understanding of a visual communication between human emotional energy and spirituality of nature. These works relate to the world globally.
Romaine works with oils, acrylics and other mixed media to integrate the textures and line symbols used to create an aesthetic balance found in nature between land and water.

The artist has soloed many times in a Cessna 150 to understand aerial views of the landforms and incorporates this into her works. She has exhibited in Australia, New York, California, Texas, West Virginia, Maryland and Florida. Romaine has degrees in Graphic Design,(Aust.) Classical Piano and Theory (Aust.) and a Gerontology degree from West Virginia University. Her current studio is in Boca Raton Florida, USA 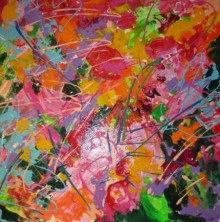 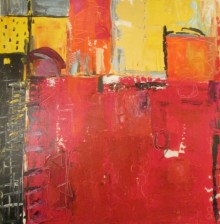 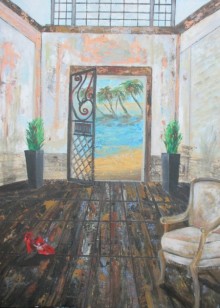