Top 20 Art Sculptures around the World 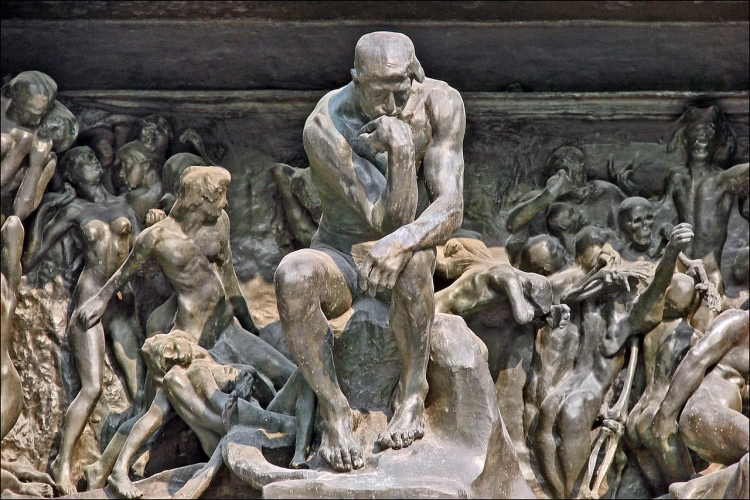 Sculptures have an innate feature of immediately connecting to the audience before it. It engages a viewer with its three dimensional dynamics and often sends out a message, be it historical, cultural or social. Since centuries artists have been communicating with their audiences through sculptures and while European countries take the lead in showcasing sculptural art as a part of their streets, places of historical relevance, places of worship, etc, it's not unusual to see sculptures communicating with passersby on streets world over. Here are 20 sculptures from around the world that have blown minds and bridged the gap between art and viewer.

To make the list more comprehensive, we have divided the list between sculptures that are masterpieces from the yesteryears and those that are relatively modern.

If we are talking about world renowned art sculptures then missing the work of Michelangelo is a cardinal sin. His creation - David that remains Italy's most priced possession stands second to none. Belonging to the Renaissance era and created by Michelangelo between 1501 and 1504, this 5,17 meter nude marble statue of a standing male never fails to take you through the yesteryears of the time went by. It represents the Biblical hero David, a favored subject in the art of Florence.

Only few sculptures are as iconic as Auguste Rodin's The Thinker. This sculpture of a nude man, sitting, resting his chin on his hand was originally called The Poet by Rodon. So far, 10 of The Thinker castings have been replicated. The original marble copy of The Thinker currently resides in the Musee Rodin in Paris, France. The sculpture was moved to the museum after Rodin's death when his whole estate was given to the French Government. Created in 1881, the sculpture is made using metal. It stands 1.89 m in height, 98 m in length and 1.4 m in width. It is interesting to note that the masterpiece was a victim of terror attack in 1970 when unidentified bombers strapped what is suspected to have been three sticks of dynamite to its base. The feet and legs were damaged in this explosion but the sculpture is still on exhibit. Alexandros of Antioch's Aphrodite of Milos, better known as the Venus de Milo is one of the most famous works of ancient Greek sculpture that dates back to 101 BC. Resting at The Louvre Museum in Paris, this 80 inch marble sculpture is known for its missing arm. It is believed that the sculpture was discovered on April 08, 1820 by a peasant named Yorgos Kentrotas, inside a buried niche with the ancient ruins of Milos, the current village of Tripiti. It is popularly believed that this Grecian sculpture depicts the Greek Goddess of love and beauty. This massive sculpture in the Black Hills region of South Dakota in the US was completed in 1941 under the father son duo - Gutzon Borglum and Lincoln. The stunning sculpture that stands 60 ft high (18 m) depicts the faces of US presidents - George Washington, Thomas Jefferson, Thoedore Roosevelt and Abraham Lincoln. To hear it in the words of the sculptor, "The purpose of the memorial is to communicate the founding, expansion, preservation, and unification of the United States with colossal statues of Washington, Jefferson, Lincoln and Theodore Roosevelt." A not-to-miss Brazilian attraction, Christ the Redeemer is an Art Deco statue of Jesus Christ in Rio de Janeiro in Brazil. Created by French sculptor Paul Adowski and built by the Brazilian engineer Heitor da Silva Costa along with French engineer Abert Caquot, the massive sculpture stands 38m (98 foot) in height and is made using concrete and soapstone. To celebrate the monument's 75th anniversary in 2006, authorities built a small chapel at its base. One can get married beneath Christ the Redeemer. As enticing as its name is, this marvelous sculpture made in marble way back in the 19th century (1889 to be precise) by Auguste Rodin was originally called Francesca da Rimini. It depicts the 13th century Italian noblewoman immortalized in Dantae's Inferno who falls in love with her husband Giovanni Malatesta's younger brother Paolo. What's interesting in the sculpture is the detailed depiction of the series of event. The couple's lips almost touch in the sculpture, thus suggesting that they were interrupted and met their demise in between their kiss. Rodin chose to keep the figures nude so that nothing could interfere with the raw emotion that he wanted the viewer to feel when they saw the sculpture. The original sculpture is in the Musee Rodin in Paris, France. When we are talking of art sculptures, the article would remain incomplete without the mention of the Statue of Liberty. As known to us all, The Statue of Liberty is a colossal neoclassical sculpture on Liberty Island in New York Harbor in New York City, in the United States. Standing 93m tall, this masterpiece, created by Frederic Auguste Bartholdi and Richard Morris Hunt is made using gold, copper, steel and wrought iron. This stunning sculpture is a gift from the people of France to the people of the United States and it was dedicated on October 28, 1886. The Statue of Liberty represents Libertas, the Roman goddess. She holds a torch above her head, and in her left arm carries a tabula ansata inscribed July 4, 1776, the date of the US Declaration of Independence. Another of Auguste Rodin's masterpiece is the Monument to Balzac. This sculpture was created by him in memory of the French novelist Honore Bazac though he could never see his finished work in bronze. During his time, the work was rejected as the critics weren't too happy with the way the author was depicted in Rodin's work. On July 2, 1939 (22 years after the sculptor's death), the model was cast in bronze for the first time and placed on the Boulevard du Montparnasse at the intersection with Boulevard Raspail. This cute little masterpiece in Brussels, Manneken Pis, which means - Little man pee in Dutch is made from bronze and stands 61 cm tall. The sculpture depicts a naked little boy urinating into a fountain's basin. It was designed by Heironymus Duquesnoy the Elder and put in place between 1618 - 1619. A lot many legends are behind the origin of this statue and it does hold some historical significance. Over the years, this sculpture has been stolen a lot many time though now the original sculpture is restored and kept at the Maison du Roi Broodhuis on the Grand Place. The nude sculpture is dressed at different occasions as well. This Greek sculpture is one of the oldest, believed to be made towards the end of the Severe period, circa 460 - 450 BC. The original masterpiece is lost but the work is known through numerous Roman copies - both in marble and in bronze. The sculpture depicts a discus thrower about to release his throw "by sheer intelligence".  This sculpture well depicts a perfect combination of rhythmos, harmony and balance though his pose is said to be unnatural to a human, and today considered a rather inefficient way to throw the discus. The sculpture is now at display at the National Museum of Rome. It is interesting to note that the statue was notoriously sold to Adolf Hitler in 1938 as a trophy of the Aryan race, but returned to Italy in 1948. Housed at New York, this stunning sculpture is that of a nude woman sitting in meditation with a crack running across her body illuminating her. This crack depicts that she has been enlightened. Artist Paige Bradley has made this beauty using bronze and what is most amazing is that each of the pieces are made to float separately from one another. One of the many attractions in France, this mystic sculpture can truly leave any one spellbound. In this sculpture, artist Bruno Catalano is trying to convey the parts of life missing from the modern day human being. A true work of art - the Sinking Building outside the State Library in Melbourne depicts a building being immersed within the land. Brainchild of Dutch sculptor Petrus Spronk, this was named as Architectural Fragment originally. It is also at times perceived as a library rising from the ground to symbolize the rise of importance of reading. Prague has its own share of art sculptures and perhaps one of the best would be this one of the Man Hanging Out. Creation of David Cerny, the sculpture depicts the dilemma of Sigmund Freud, holding on to the post with one hand wondering whether to let go or hold on. The land of ice, Iceland has this massive stone structure of a man with a briefcase in a formal attire without a torso...rather his upper half covered with a massive boulder thus giving it the name - The Unknown Official. Created in 1994 by sculptor Magnus Tomasson, it remains one of Iceland's top attractions. Beautifully made, this sculpture of one of the most coveted world leaders Nelson Mandela is one conceptualized in a completely out of the box way by artist Marco Cianfanelli. It consists of 50 steel columns, which have been used to create the face of Nelson Mandela using laser rays. The masterpiece is installed in the town of Howick in South Africa where he was arrested. People of the River

Conceptualized and created by artist Chong Fah Cheong in Singapore, these sculptures of children about to take a jump in the waters below the pool would unfailingly take one to their childhood memories. Romania's priced possession, this art sculpture of the famous poet Mihai Eminescu is a part of every list enlisting the world's best art sculptures. What makes it most interesting is the way it just blends as a painting among the picturesque cloud. Call it stairway to heaven or descending from heaven, this lovely sculpture by David McCracken is situated at Bondi beach in Australia. Danish artist Jens Galschiot depicts the goddess of justice as an overweight woman, who is seen sitting on the shoulders of a weak and feeble African man. The figure represents the reality of today - the industrial world and poverty at the other end. "I sit on his back and doing a lot to help this poor soul, but not a tear from his back" - this inscription is engraved on the nameplate, which is located on the pedestal.