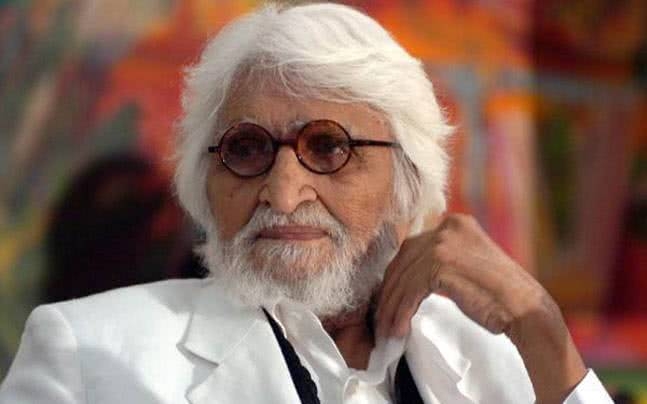 Maqbool Fida Husain, known as M.F. Husain (1915-2011), also called the 'Picasso of India'  born in Pandharpur, has been one of the most prominent and recognized Indian artists, globally. His works speak miles about him and his efforts.

He began his career by being a hoarding painter for the Indian Cinema in Mumbai. , after completing his Art school. Interestingly, his affection towards art developed due to his exploration and introduction to Calligraphy, and that took him to the field of Art, and the rest, as they say, is History.

His style of painting was inspired by the European movements, specially Cubism and had an intrinsic use of vibrant colours and forms. During his career M.F. Husain painted several series of paintings and was famous across the rich and elite families of India, especially with Indian Actors and Film Industry.

He painted a series of paintings which reperesented Indian Civilization which were comissioned by Usha Mittal, and they contributed greatly to harbing India's history. Indian Civilization was an arduous series of eight magnificent paintings, where each painting depicted and explored a varying theme showcasing India and its diversity. In another series, Hussain's Horses have always been a collection that has been appreciated across the country and was a major factor that contributed to his worldwide recognition and also media coverage.

Main themes of Husain's paintings were religious deities and the figurines that reperesented History. And some of his paintings also incorporated moments and memories from his own life.

Husain has also been one of the few artists who took to cinema and filmmaking, and found offbeat success. His film 'Through the Eyes of a Painter', gained good critical acclaim and also won award in a Film Festival in Berlin. Influenced by the partition of India and Pakistan, Husain gave the thought of 'New' India and collectively with many other artists, formed a Progressive Artists' Group.

While his career got him fame, it did not leave him from getting into controversies. His paintings of Goddesses being nude, got him into trouble and led to his self imposed exile to Qatar and London, and sadly he died in London, on 9 June 2011. Despite death threats, he always wanted to return to India.