Interview With Artist Pramod Kurlekar On Why Money Is Secondary 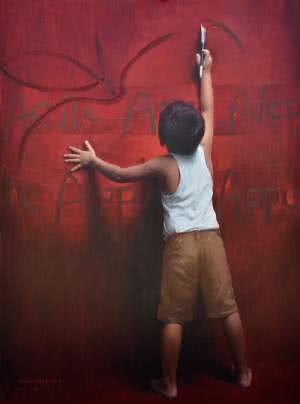 Pramod Kurlekar is one of those special artists, who can make the female form look more stunning than it already is. His beautiful strokes make your freeze and it's difficult to take your eyes off his paintings. We had the pleasure to catch up with Pramod and here is his story.

Sketching in the Temple:

Pramod comes from a small village, where the biggest attraction was a Hanuman temple with elaborate paintings on its wall. One day he saw another kid, much older than him, trying to replicate the paintings. The innocent artist in him, wanted to see if he could do the same. He was only six years old then, but he realized he could sketch.

Since that day, he started sketching anything he would see. But, like any other kid of his, others appreciation became his main motivation.

Those childhood sketching to please the village people, trained him to take on bigger and more challenging concepts.

"English is such a funny language, we write something and say something else. As a young kid, there was always a fight inside me to solve this inconsistency in the way we pronounced everything." To solve his dilemma, the artist inside him would learn by drawing images for the words. Luckily, his schoolteacher hardly cared and no one ever checked his books and notebooks. But, one fine day, he got caught; his teacher saw his act of creativity as a form of defiance and called for his father.

Surprisingly his father was not all that upset, instead he did not believe Pramod could sketch like that. To confirm his sketching skills, he got him a sketchbook and told him to sketch in front of him to prove it.

While his father, did not try to encourage him to continue to sketch, it was a big deal for Pramod that he did not try to stop him either. Unfortunately or fortunately, he was not doing too well in school and failed in the 9th grade. Art was all he could focus on and his teacher suggested his father to look at higher education art.

When he found there was something like higher education in art, Pramod made-up his mind; he was going to pursue art. He got into Kala Mahavidyala for his diploma, followed by getting into JJ School of Art (Mumbai) for a degree in art education.

Money only to Survive:

For an artist, things are often not easy. While at JJ School of Art, in order to survive, Pramod started street tourist sketching and got associated with the Plaza Art Association (a free art gallery on the street). All he cared about was to paint and create art, making money was secondary.

Even though he did not complete his degree from JJ School of Art, he got a lucky breakthrough with a two-year scholarship to freely paint, while his basic costs were covered. It was during this time that he got a call for an exhibition at Jehangir Gallery, a premier art gallery in India (for which he had applied years back).

To exhibit at Jehangir Gallery, he needed atleast Rs.1 lakh to do a full show.

Luckily, just before he was going to sell the jewelry, someone brought one of this works for an astronomical price, thus helping him put up a show at Jehangir Gallery.

Fight between Art and Math:

Pramod's artwork focuses on portraits, which are dreamy and always have a story to tell. His style is very fluid and arouses deep emotions.

The current inspiration for his paintings are children and they focus on his own childhood memories. He feels that as adults we do not understand a child's point of view and tend to be very judgmental about everything. "One-way to overcome our lack of understanding and is to try and think from a child's point of view. Life would be a lot simpler, creative and pure."

While painting from his childhood memories, strongest emotions he recollects were those of break things, but only to create something new. This aggression was not negative, it was only an urge inside to explore and discover the unknown.

One of his childhood memories that left a great impact was his tryst with math's.

"There was a fight between Art and Math inside me. Numbers were like demons bursting my colorful thoughts. But, teachers didn't understand my feeling and would beat me up. Now when I look back, I understand that force of art brewing inside me".

Lately, Pramod is trying to go back to those very memories and trying to find that kid who, as adults, we often tend to ignore.

Have you seen an ugly flower?

Pramod has been greatly inspired by the philosophy of John Singer Sargent, a 19th century American Artist. According to Sargent, when we react, we react to some stored memories of that past experience. That data becomes a barrier to our true vision in front of us. We need to know how to leave the past experience behind and live more in the present. Just judging the situation by its credibility would give us a fresh perspective.

According to Pramod, "Our expression and behavior has become mechanical. Our eyes are showing us so much, but we focus on only a few things. When we see a flower, why are we automatically wired to think of it as beautiful?"

Well, thats an interesting question he raises - Have you ever seen an ugly flower? Or, how often do we see a beautiful insect? Would a newborn kid know the difference between ugly and beautiful?

If you could live anywhere in the world, where would that be?

Like many other artists, Pramod is greatly inspired by his village. While we gave him the option to choose Paris, New York or any other cool city in the world, he still preferred to choose his village.

According to Pramod, "I only plan for the basic needs of my life, I don't plan and worry about things I don't need. Not worried to show off and run after material things. So, my small village has everything I could need."

Pramod is fascinated by the 'Theory of Relativity' and is trying to understand the basics behind it and portray it from his point of view:

"Everything is connected, but we want to break things and mold it in a way that we want to use. So want to work on the idea of relativity with a child as the center point of view. Want to so show that we don't need to go way to deep, instead try and appreciate what's close to us."

While most of his work focuses on the purity that stems from his humble background, we look forward to see how he mixes new ideas and concepts with his style to put across his message. To view his profile Click Here!